By using this site, you are allowing the configuration and use of cookies. For details, please see our Privacy Policy.new window

Flora of the State Guest House

In the following, we will introduce you to the plants that you can see at the guest house, and explain their origins. 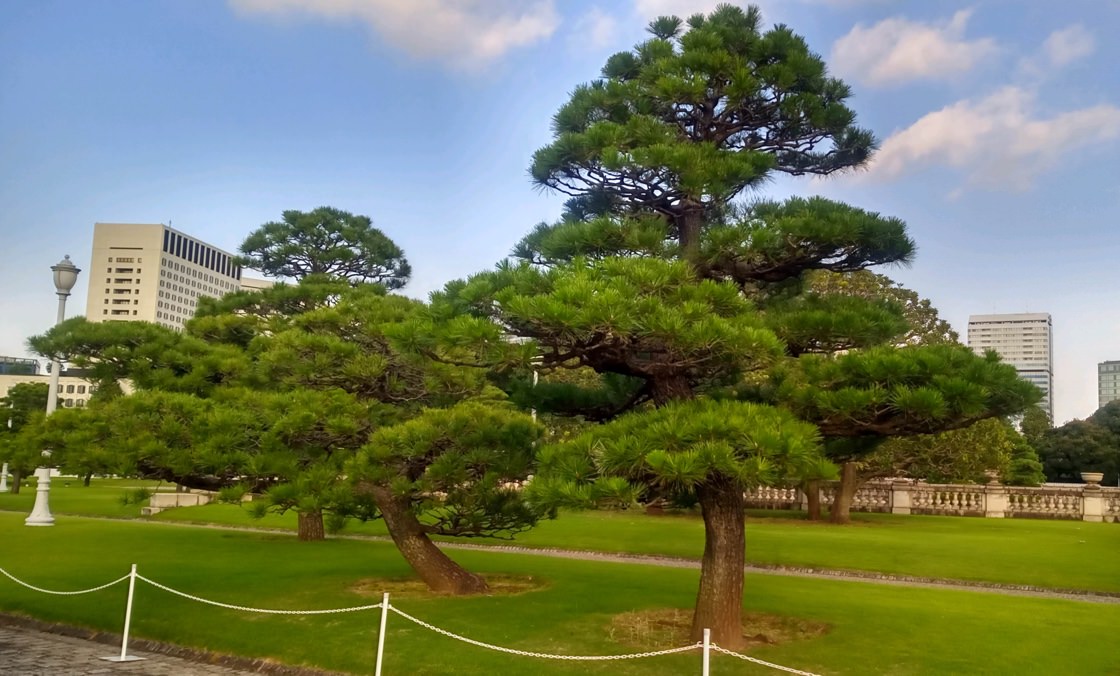 1. Japanese Black pine (Pinus thunbergii)
(Between the central gate and the main gate)

During the renovation that that turned the Akasaka Palace into a guest house facility (its renovation into a guest house) over the course of over five years beginning in 1968, 142 black pine trees were transplanted from Kujukuri Beach in Chiba Prefecture. Similar to the design of the main building of the guest house, the front yard is also designed to be symmetrical, with thorough consideration given to details such as the shape and arrangement of the black pine trees.
In order to maintain the shape of these trees, we pluck the new shoots in May, then remove old leaves through touch and cut overgrown and obstructive branches in winter. 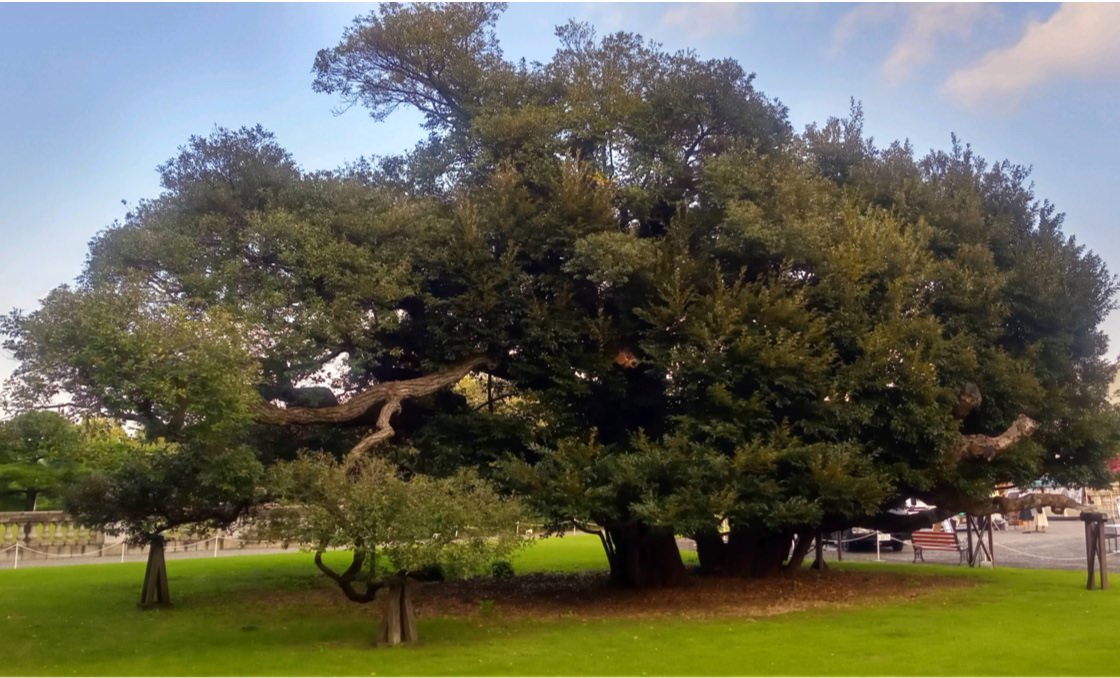 2. Itajii chinkapin (Castanopsis sieboldii)
(Both ends of the front yard)

Representing the State Guest House is an old tree that is estimated to be 200 years in age. In the season of fresh greenery, the tree shows that it is still full of vitality with signs such as the emergence of new sprouts and the growth of branches and leaves each year. In addition, the tree creates a strong impression with its rough appearance that was formed from withstanding the wind and snow for many years.
During the facility’s renovaton into a guest house, the Itajii chinkapin that was originally planted on the east side had withered up, and was therefore replaced with a new Itajii chinkapin to form symmetry on both sides.
* Against the backdrop of the State Guest House on the left (west side) is the Itajii chinkapin that is estimated to be 200 years old (the tree in the picture). The tree on the right (east side), however, is the Itajii chinkapin that was planted during the guest house renovation. 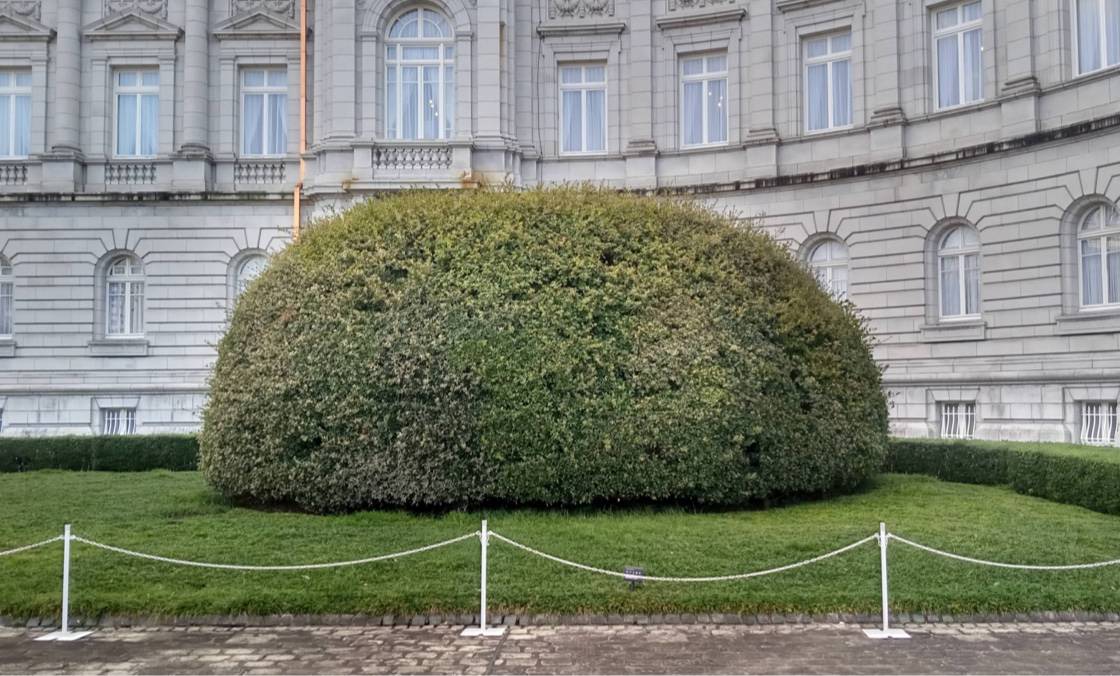 3. Ubame oak (Quercus phillyraeoides)
(Both ends of the front yard)

Ubame oak is found in coastal areas and low mountains scattered across the Pacific side west of the Boso Peninsula, Shikoku, Kyushu, and Okinawa. It has a dense and hard wood grain, and is well known as a material for high-grade charcoal.
Since Ubame oak is resistant to pruning, it is often used for roadside trees, hedges, and other such purposes. However, it appears that it is rarely used for large-scale group-planting (planting different or similar plants in close proximity) such as that of the State Guest House. Keeping the oak in a nice circular shape is difficult, and presents itself as an opportunity for gardeners to showcase their abilities. 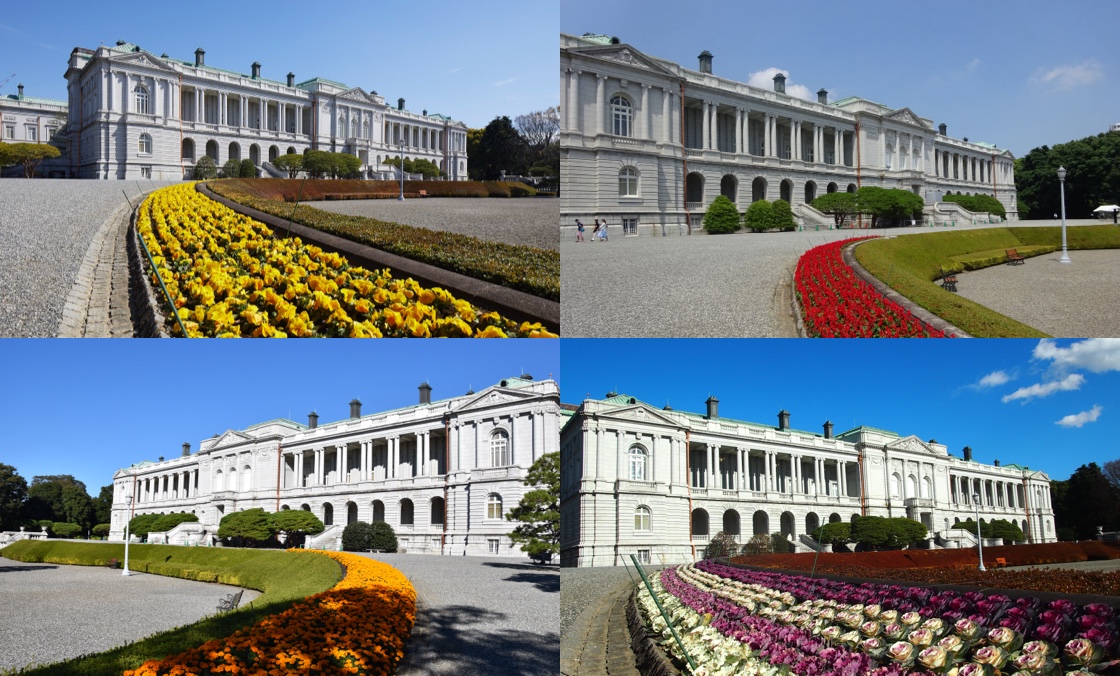 4. Flowers in the flowerbed
(Flowerbed in the front yard and main garden)

Decorating the front yard and main garden are pansies in spring, salvia in summer, marigold in fall, and ornamental kale in winter. The arrangement of the flowerbed is symmetrical, just like the design of the main building of the State Guest House. In order to maintain the beauty of the flowers, we not only water them, but also take various measures such as plucking off the wilted flowers and snipping overgrown buds to make the height uniform. 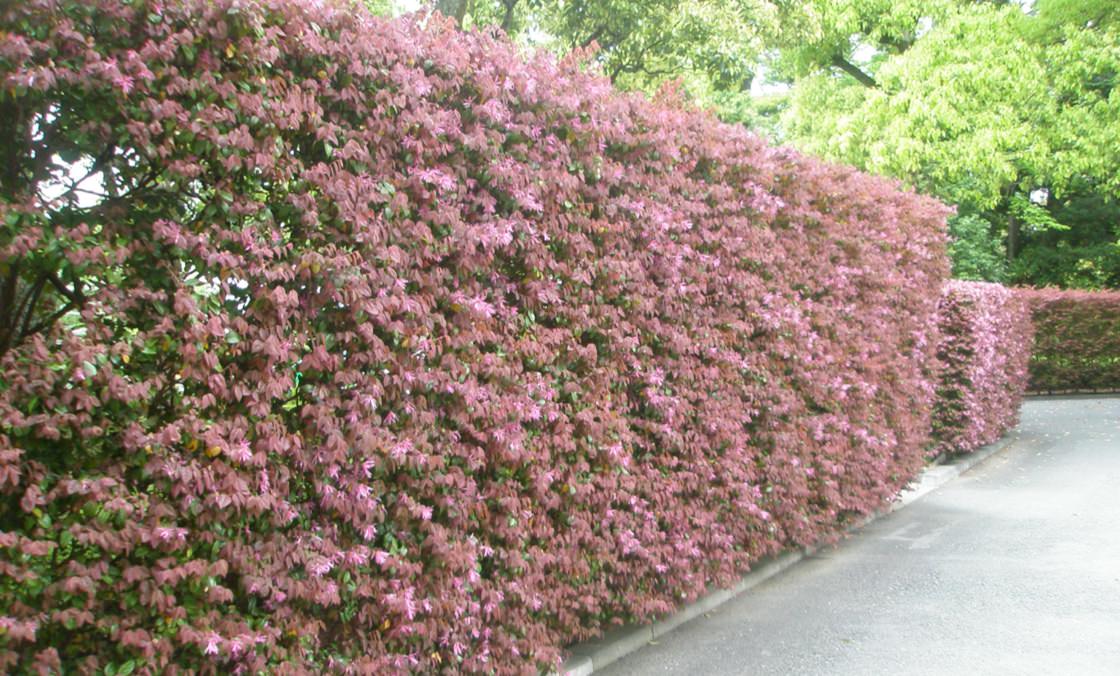 This is a variety of Loropetalum chinense that is native to China.
Although it belongs to the same family as the Hamamelis japonica, the one we have here is an evergreen shrub. It has the same ribbon-shaped flowers as the Hamamelis japonica, but is magenta in color. As an evergreen with yellowish white flowers, Loropetalum chinense grows naturally in Japan, but in its natural state is distributed over areas that are detached from one another such as Shizuoka Prefecture, Mie Prefecture, and Kumamoto Prefecture. 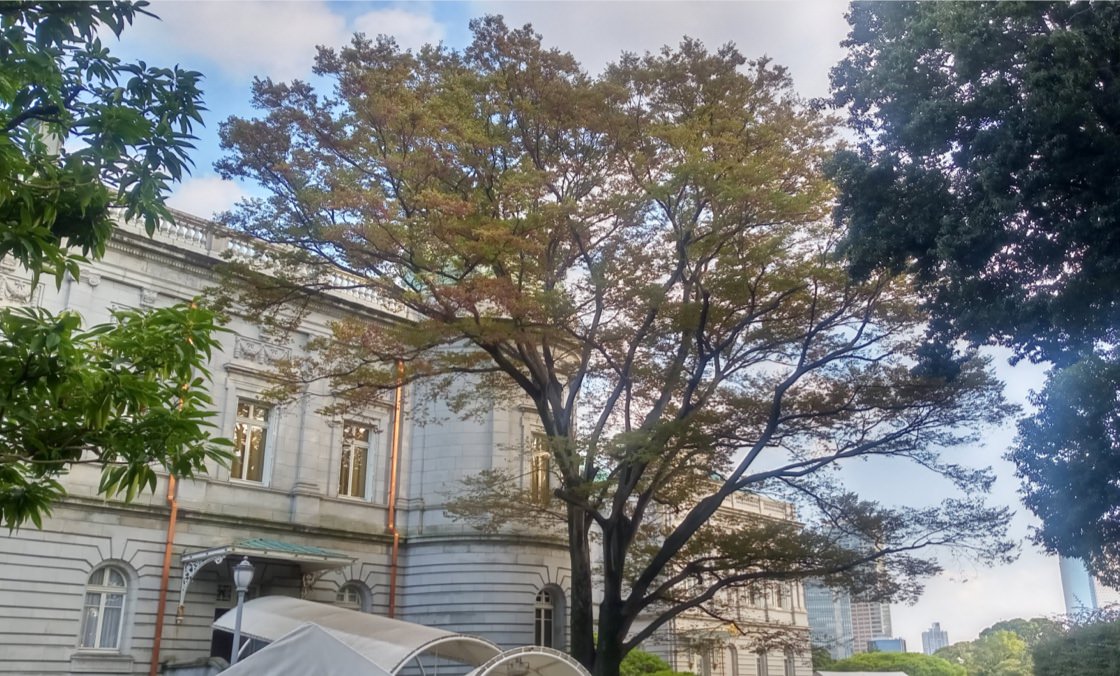 6. Japanese zelkova (Zelkova serrata)
(Near the visitor’s entrance to the main building and southeast of the main garden) 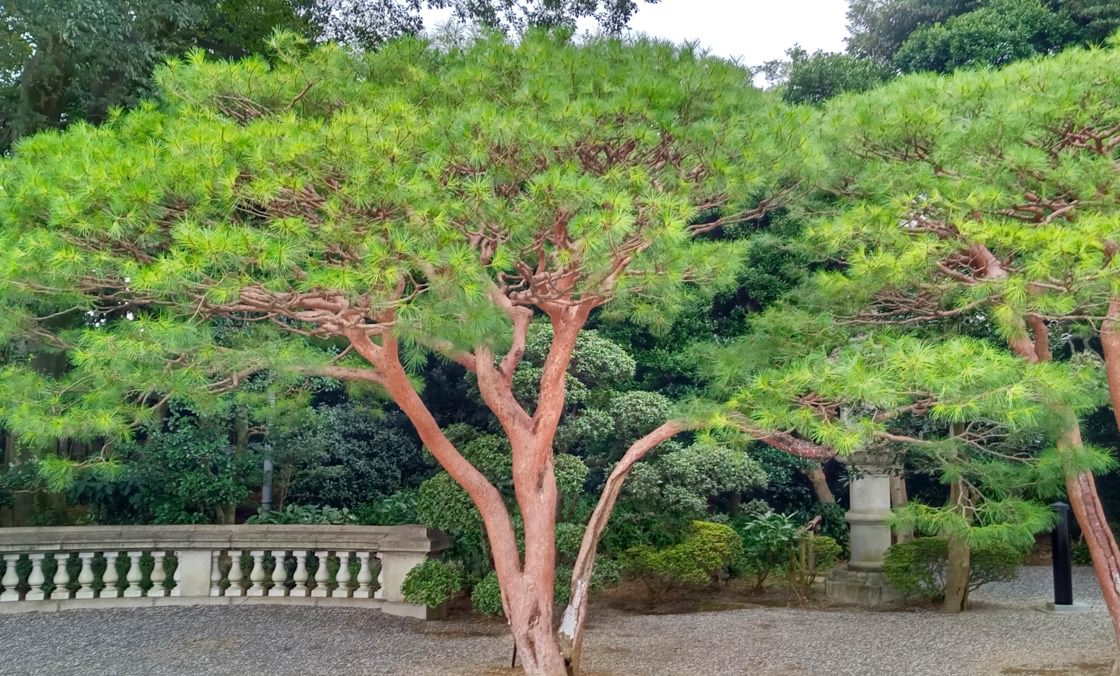 7. Compact Japanese umbrella pine (Pinus densiflora 'Umbraculifera')
(Around the south side of the main building in the main garden)

Unusual for coniferous trees, these peculiarly shaped pine have branches that spread out like a fan from the root.
These are also cultivars that consist of Pinus thunbergii with Pinus densiflora grafted onto them.
Before the renovation that turned it into a guest house, there used to be a large open space on the north side of the State Guest House’s current main building, which had Compact Japanese umbrella pine (Pinus densiflora 'Umbraculifera') planted around it. However, due to the renovation to the guest house, they were transplanted to the periphery of the main building.
Since the trees are old, we refrain from pruning them frequently, and only do so about once every three years, after considering the timing of their recovery. Also, when polished, the red of the tree trunks shine and their beauty is accentuated. 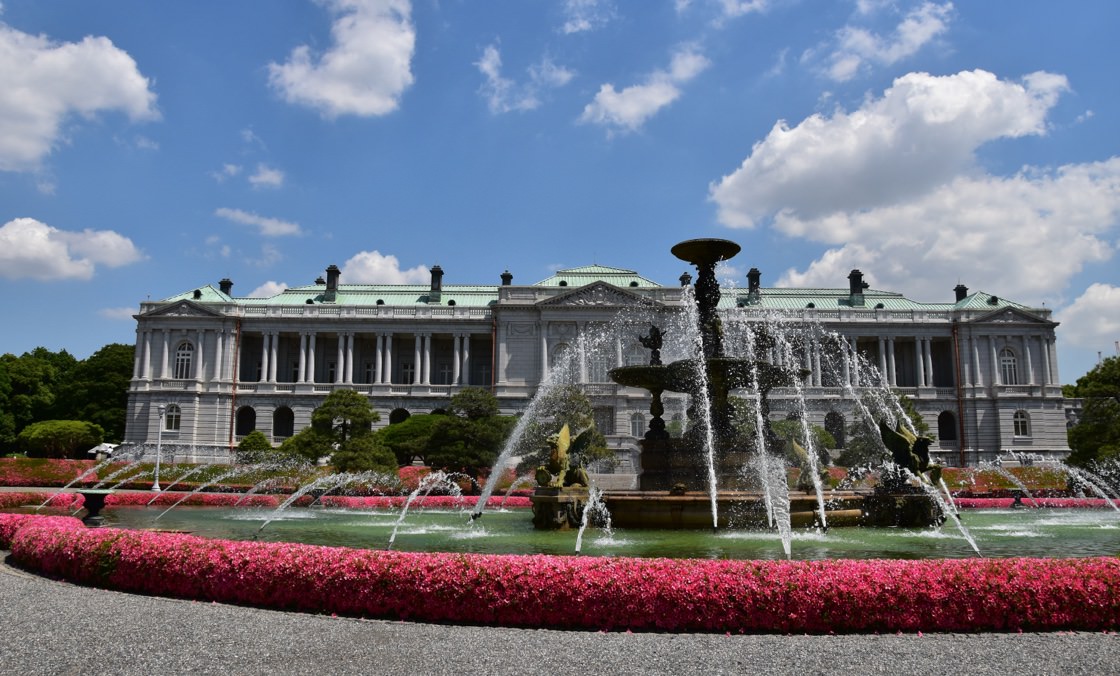 8. Satuki azalea (Rhododendron indicum)
(Around the fountain in the main garden)

It is a member of the azalea family. It was given its name due to the fact that it blooms around May, which is about a month later than other azaleas.
To maintain a large number of flowers and to make them bloom beautifully, we trim the azalea after it flowers and prune its overgrown branches in winter. 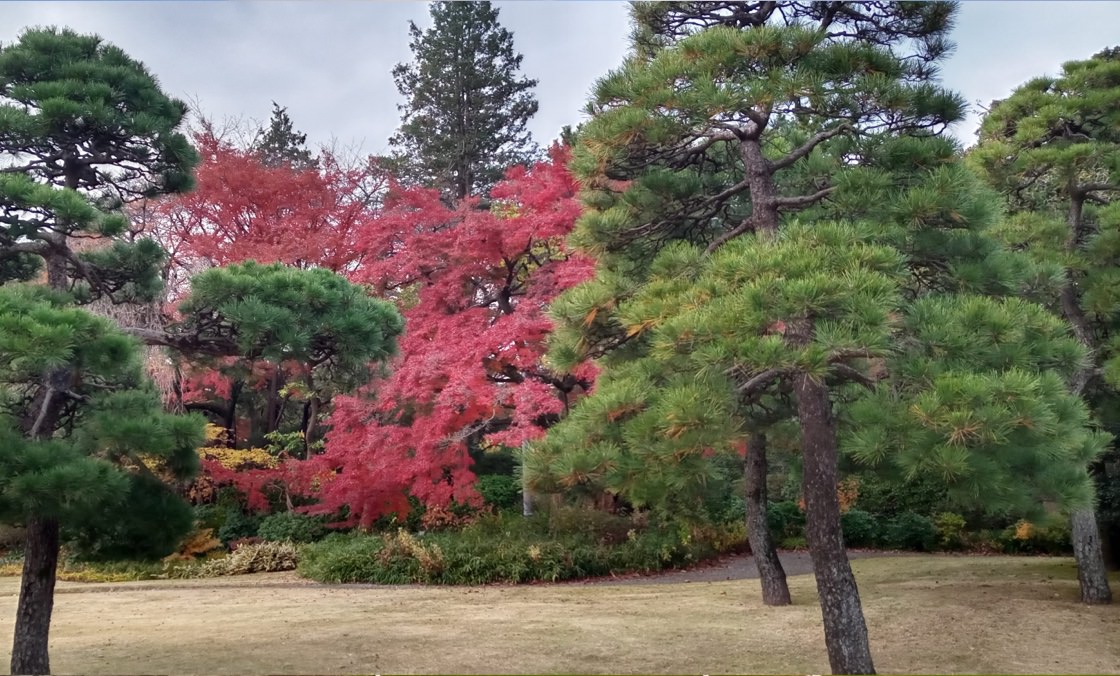 These are Aceraceae plants. Many of the Aceraceae plants have leaves that are shaped like the palm of a hand. According to a theory, the word for maple in Japanese “Kaede” is altered from the original descriptor "Kaerude" (frog hand), which was coined due to the maple leaf’s resemblance to a frog’s hand. There is also the archaic word "momizu," which refers to autumn leaves. This is said to be the predecessor to “Momiji,” which is the modern word that is now used to describe maple with beautiful autumn leaves.
In areas where there is no Moso bamboo, such as the Tohoku region, people in the past not only loved autumn leaves, but they also seem to have made daily necessities by peeling off and weaving thin layers of wood from maple trunks. 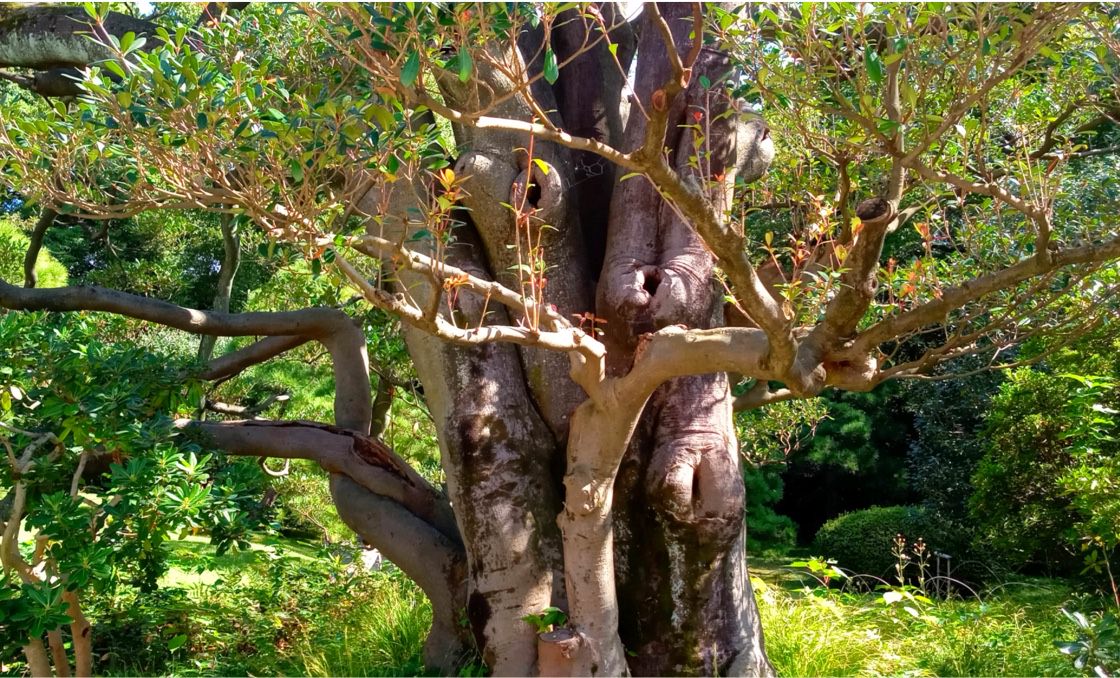 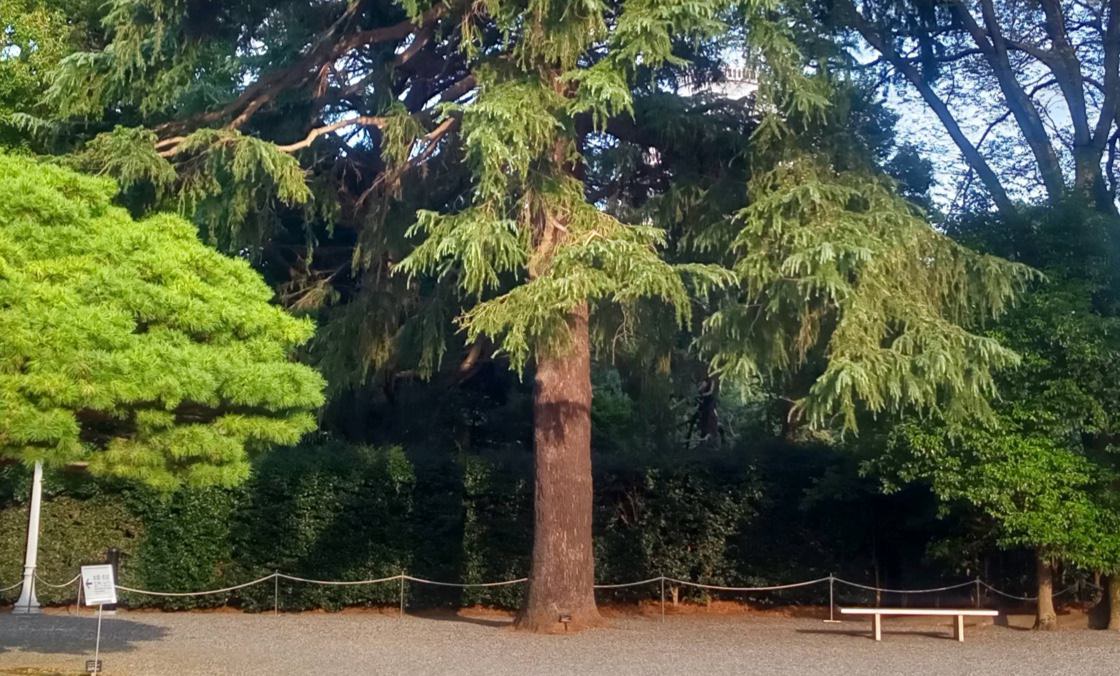 11. Himalayan cedar (Cedrus deodara)
(East side of the main garden)

The plant is said to have been brought to Japan in 1879. Due to its large size, the Himalayan cedar is used as wood in the countries that surround the Himalayas. However, in Japan, it is not suitable as wood due to the large amount of water it contains, and is often seen as a shade tree or garden tree. If the Himalayan cedar in the main garden grows too large, it blocks the sunlight of other trees and affects their growth. Therefore, several times a year, we use aerial vehicles to remove dead branches and to carry out pruning to regulate its growth. 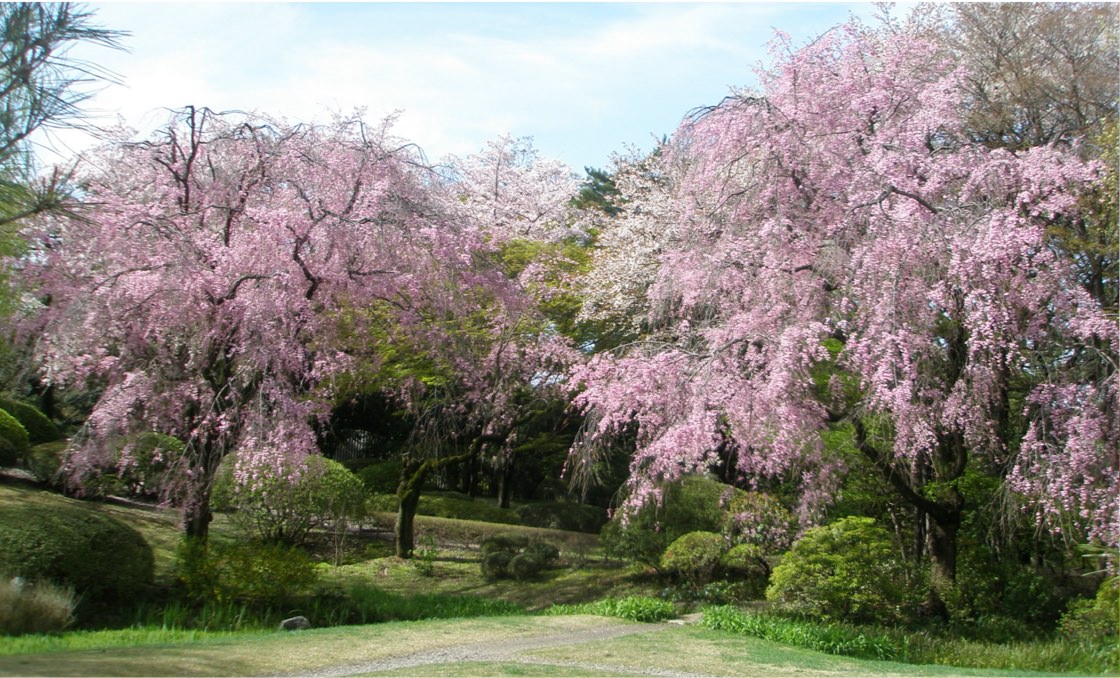 12. Sakura (Cherry blossoms)
(South side of the main garden)

The plant has long been loved by the Japanese people and has been featured in numerous poems and paintings. In addition to being cherished for its flowers, Sakura is used in various ways as its leaves are pickled in salt to make foods such as Sakura mochi, its bark is used in Kabazaiku (cherry bark craft) to create items such as tea canisters, and its wood is used for thresholds and woodblock printing due to their strong nature.
The three major species of Sakura in Japan (Usuzumizakura in Neo Valley, Yamataka Jindaizakura, and Miharu Takizakura) are all Edohigan zakura (Cerasus itosakura) with branches that hang down. Similarly, the Sakura in the main garden of the State Guest House is also Edohigan zakura. In addition to this, Someiyoshino (Prunus yedoensis), Yaezakura (double cherry blossoms) and other species of Sakura can also be seen at the guest house. 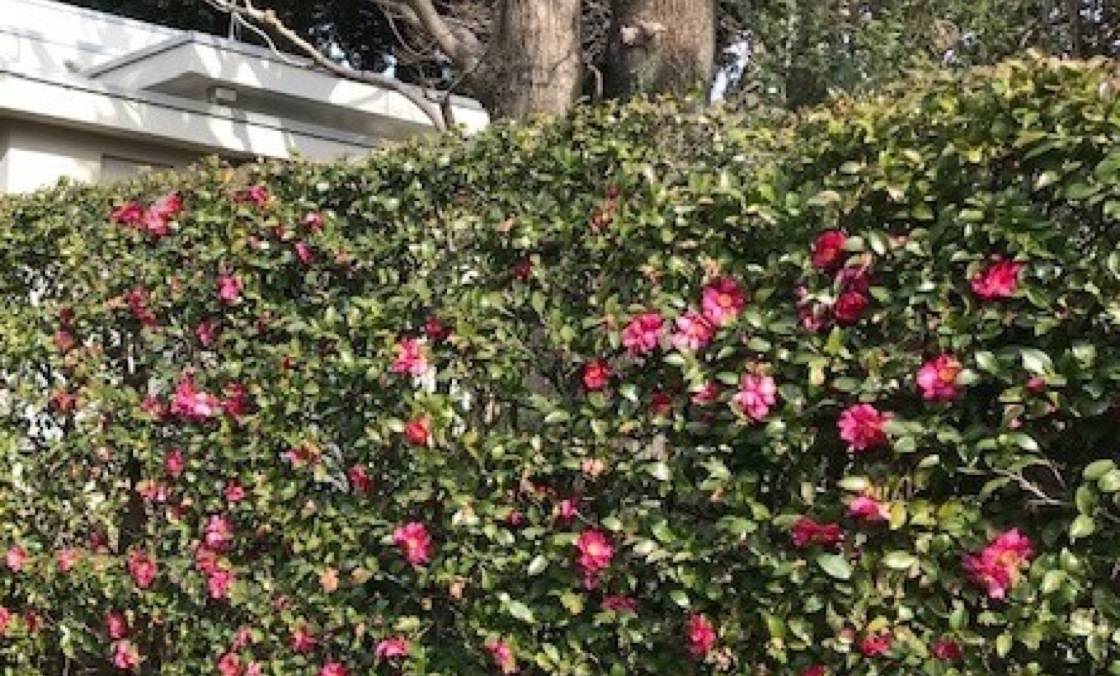 This plant has long fascinated people with its bright red flowers that bloom in winter. Although it is native to East Asia, Camellia japonica was also introduced to Europe and was highly prized there. In addition to the beauty of its flowers, the oil extracted from the fruit of the plant is also used for food, along with cosmetics, medicine, and other such purposes. Izu Oshima Island and the Goto Islands are famous locations for producing camellia oil.
At the State Guest House, there are Camellia sasanqua and Tachikantsubaki that are similar types of Camellia japonica, and these decorate the garden from autumn to winter. 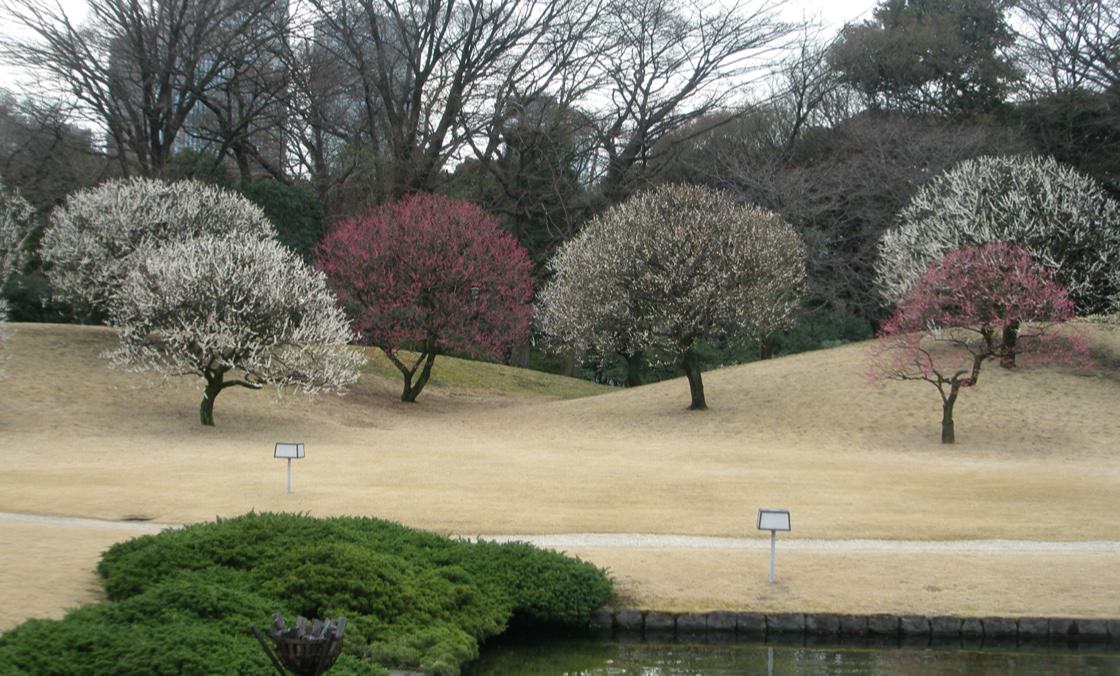 The plant is native to China and appears in the "Kaifuso" (the oldest Japanese collection of Chinese poems) that was written in the Nara period. From this, we know that it had already been introduced to Japan by that time. Before the Nara period, Japanese plums were referred to when speaking of flowers. Plum trees are not only loved for their flowers, but are fruit trees that Japanese people have long been acquainted with in their daily lives by using their fruits and seeds for food, medicine, and other such purposes. In the garden of the Japanese Style Annex, there are eighteen white plum blossoms and five red plum blossoms that are in full bloom in early spring. 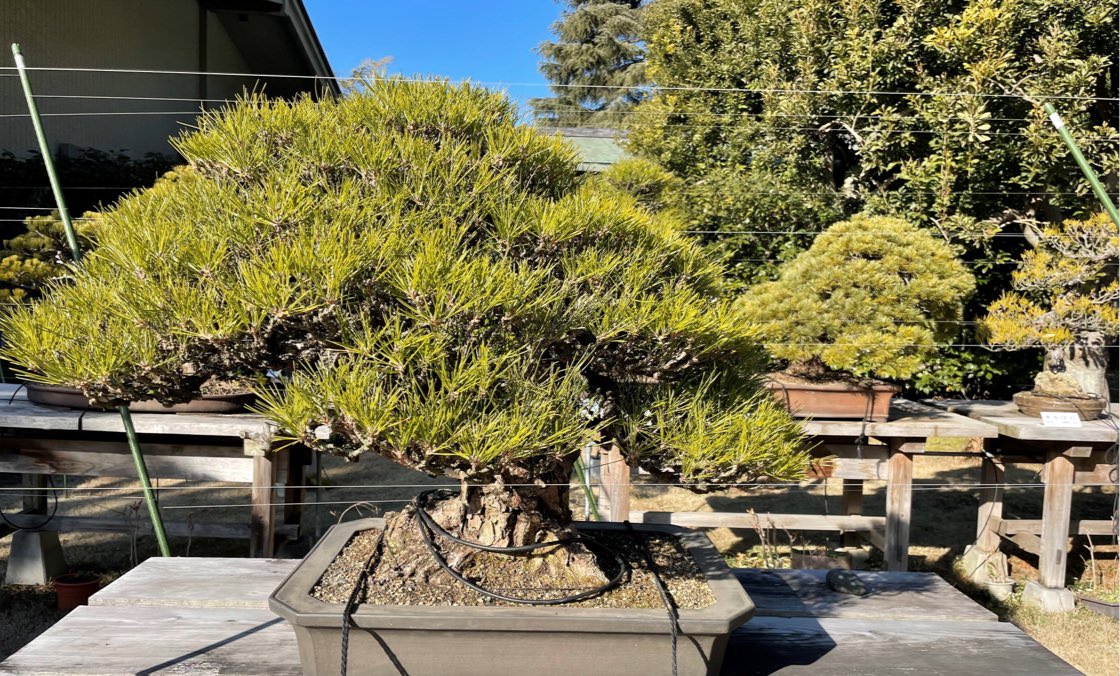 The State Guest House owns eighteen bonsai trees, which include species such as Japanese white pine, Japanese black pine, Chinese juniper and maple. The trees have been shaped into different styles such as the "Moyogi style" where the trunk is bent to the left and right, and the "Ishizuki style" where the roots are planted over a rock. Some of the trees are 180 years old and are constantly being maintained through measures such as disinfection, replanting, and fertilization.